Yes, indeed, good things grow in Ontario, and good times are ahead at the market. Can’t get enough of of June’s green delights: sweet baby lettuces, sauteed radish tops and fiddleheads, grilled asparagus and romaine, and fresh herbs on everything! There’s more than green coming, though, a rainbow of delicious food is on the way.

Sosnicki Organic Produce news: “It’s really firing up around here! Strawberries will start to trickle out this week, field lettuces and young kale are kickin’ it, bunched carrots, bunched beets from the greenhouses are tasting amazing, green garlic is massive, and a few more bunches of our white turnips will be around as well. In the meantime we are gearing up to plant late storage crops. It’s everything all at once around here! Cheers to the season!!” Jess, Ben, Joe & crew 🙂 (That’s Nate Sosnicki inspecting the crops in the photo up top.)

Jackie Kwitko had to postpone her start due to an injured shoulder last week. She’ll be coming with Fressy Bessie ice pops to add to your enjoyment of the beautiful afternoon we’re expecting.

Welcome to Patti Robinson of Robinson Bread. She’ll be at the market the second and fourth Thursday of each month with the breads and pastries she makes, which feature local fresh-milled grains and seasonal produce. 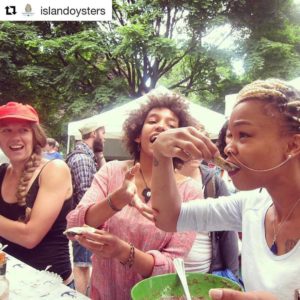 Judging by this photo, taken by Jason Kun at the Island Oysters table last year, his visit is going to be a lot of  fun. He will be offering fantastic sets from this list:

Malpeque Wild – PEI
Marina’s Top Drawer – BC
Kusshi – BC
Sex on the Bay* – NB
Little Neck Clams – PEI
*Jason kindly sent a note saying that if anyone finds the name of this variety too scandalous to order, ‘Beausoleil’ oysters are very similar in geography and flavour, so that name can be substituted.

Bob Felhazi called to say that Pine River will be away for one more week, as he scrambles to get warm weather crops planted. He hopes to have a steady supply of produce at the market soon.

6-piece acoustic band ‘The Turnups’ will be playing a few sets for us during the afternoon. Sounds like roots, but there will be blues, bluegrass and jazz too!

See you at the market,
Anne Freeman

Parking on the little street by the market will still be very tight due to construction vehicles, so please use the spots on Dufferin Park Ave. east of the market or elsewhere.

Please bring along the bags you need plus any extras for our take-a-bag, leave-a-bag depot.