Hyperbole or understatement? Any way you look at it, we’ve got a GIANT market ahead! And The Repair Café too! Read all about it!

Sosnicki Organic Produce News: “It’s such a great harvest! Come to load up for your weekend feasts! Tomatoes are so good this year! I really encourage everyone to freeze, can, sun dry tomatoes, tomatoes, tomatoes! We will have scads of cherry and grape tomatoes, roma, beefsteak and heirlooms. We will bring extra cases so if you don’t get around to emailing me an order to jb@sosnickiorganics.com, you may be able to just nab one at market! Our Watermelons are sweet and juicy and come in Yellows and Reds. We are bringing Cantaloupes too! Possibly the first trickle of Shepherd Peppers! (September will be pepper AND tomato month LOL); sweet onions, hot peppers like cherry bombs, chilis, some poblanos too this year, fresh dug potatoes, kale, cucumbers, cucumbers, cucumbers – in blonde and green. Our late patch of cucs is glorious! No sweet corn – we are in between patches. More coming soon. Different types of Eggplants as we grew a Japanese long, a calliope, a white and Italian Rosa Bianca too. Ben and crew will see everyone soon!” Jessie

The Shared Harvest headlines: “We will have a blowout sale on eggplant. $1.50/lb for Sicilian and $2/lb for the Japanese type. We will also have lots of romas. Other than those we have ground cherries, cherry tomatoes, celery, peppers, dill, cilantro, zucchini, cucumbers, lemon cucumbers, carrots, beets, leeks, sacred basil and parsley.” Kevin 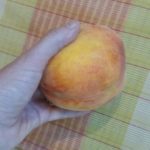 Second last week for peaches. This time, Debbie Wiecha of Niagara Lavender will be bringing a later variety, the super-size Lorings, which weigh in around a pound each.

Ted Thorpe says he’s got (literally) thousands of melons, as well as enormous peppers, abundant cherry tomatoes and much more.

A note to Park Bread Fans: Heidrun is on vacation, so there will be less baking than usual. Michael and Carley are going to bake fresh Rosemary Bread, and there will be Kamut, Spelt, Pumpkin Seed, Multigrain and Rye from the freezer. There will also be some extra loaves on the Robinson Bread table.

Urban Harvest and Waymac Mushrooms will be absent.

Stock up on garlic from Red Dog Farm, visiting with several choice varieties.

Tara of Catalyst Community Herbals will be making her monthly visit, with locally grown and made remedies, available on a sliding price scale. 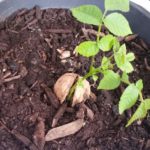 Vasile of GreenFlorin was showing off walnut seedlings last week, full of future promise. He’ll happily give you a taste of his delicious dried fruits, nuts, and oils.

The Popup Repair Café welcomes you this week, with all your stuff that needs mending! Bike repair, computers, small appliances, clothing and more. No charge, and less landfill! Thank you to Fern, Paul and their team of volunteers. 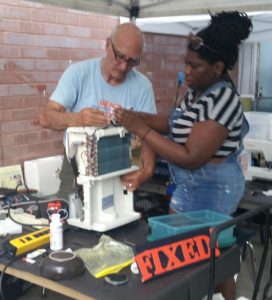 P.S. Scottish Country Dancing in the park just south of the market today, 6:30-8pm. All are welcome to join in!