First, I must tell you that it has been a busy week behind the scenes as our outdoor season vendors list takes shape, and the many assorted forms of paperwork required to hold a market in this town get ticked off the to-do list one by one. Nicole has been at the park, tape measure in hand, and I have been updating vendors’ plans and space requirements as we try to fit a new version of the big jigsaw puzzle together.

We need your help! Unless you are a subscriber who never actually attends the market (perhaps because you read our newsletter from some faraway place like a tower in Corsica), we hope you will complete a short questionnaire to assist in planning the future of the online market as well as the in-person one. We promise it won’t take long, and there are no skill-testing questions. Here is the survey: You can also find it on the website. Thank you! 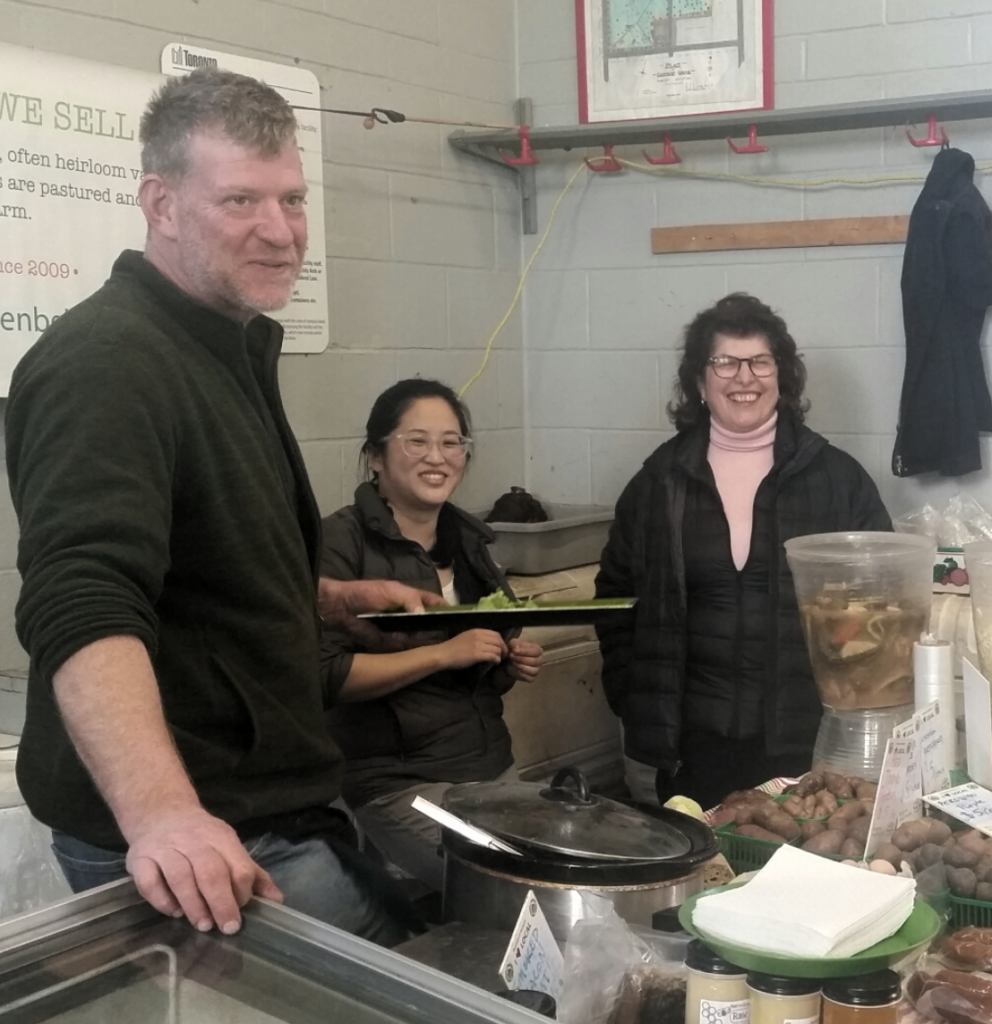 Along with the excitement about new vendors who will be joining us, there is sadness about some who will not be around–or around much, anyways. One such vendor is Marvellous Edibles, I am sorry to say. The skyrocketing cost of fuel has persuaded them to cut the number of trips to town they make each week down to one, on Saturdays, when they can do two markets in a day.

They may put in a few appearances during the summer, when they have abundant berries and heirloom tomatoes. Before they depart, they are returning to the online market this week and alternate weeks following. Here are some excerpts from Ayse’s newsletter to their customers:

“I returned to Canada late February and Jens left to go to Germany the day after. I have to be honest, not seeing a fleck of snow for 5 weeks, being able to walk on ice free dry sidewalks has been a real treat! This is probably the longest I have ever been away from work.

It feels like the world changed while we were away. I was so hoping we would be back to a somewhat normal life by now….

However, what happened in Ottawa and now the war in Ukraine are keeping our anxiety levels very high, especially for those of us whose roots are European, or in countries which have borders with Russia and Ukraine. I am starting to think that “normal” does not exist anymore….

We still have quite a bit of root veggies, lots of spinach, some salad greens and cabbage….

The weather has been fantastic the last couple of days; the snow is almost all gone. There is a lot of mud everywhere. Let’s hope it dries out soon! (previous experience says Not a chance!).” 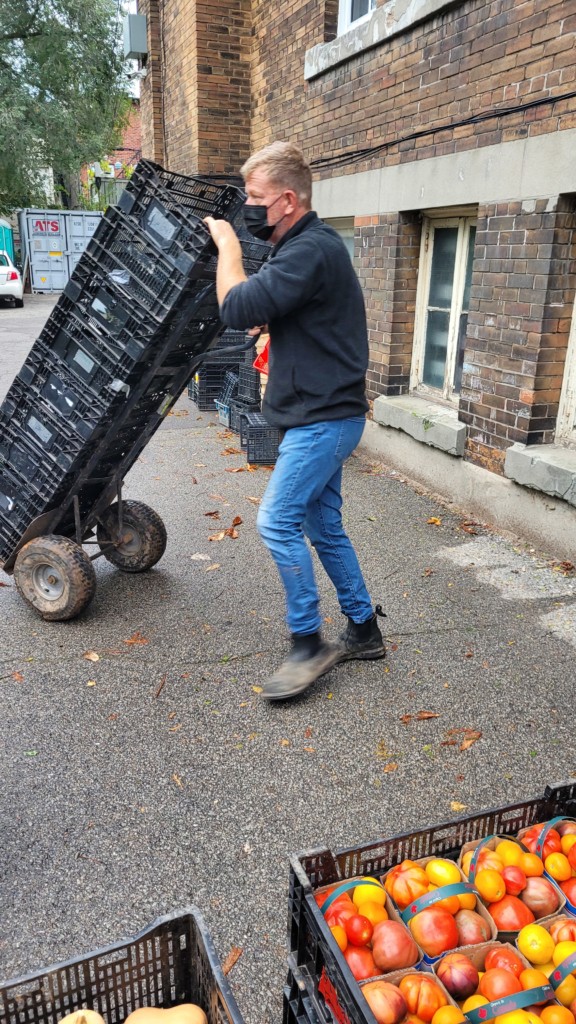 We have a new vendor joining us this time. Sarah Kern has been a market booster for more years than I can count. When she asked if she could put some of the lovely shopping bags she has been sewing on the site, we said sure, why not? (The online market sometimes has a bit more wiggle room than the in-person one!) Give a welcome to It’s In The Bag!

My bag is on the top and one of Sarah’s is on the bottom. Do you think I should tell my hubby it’s time for a new bag? 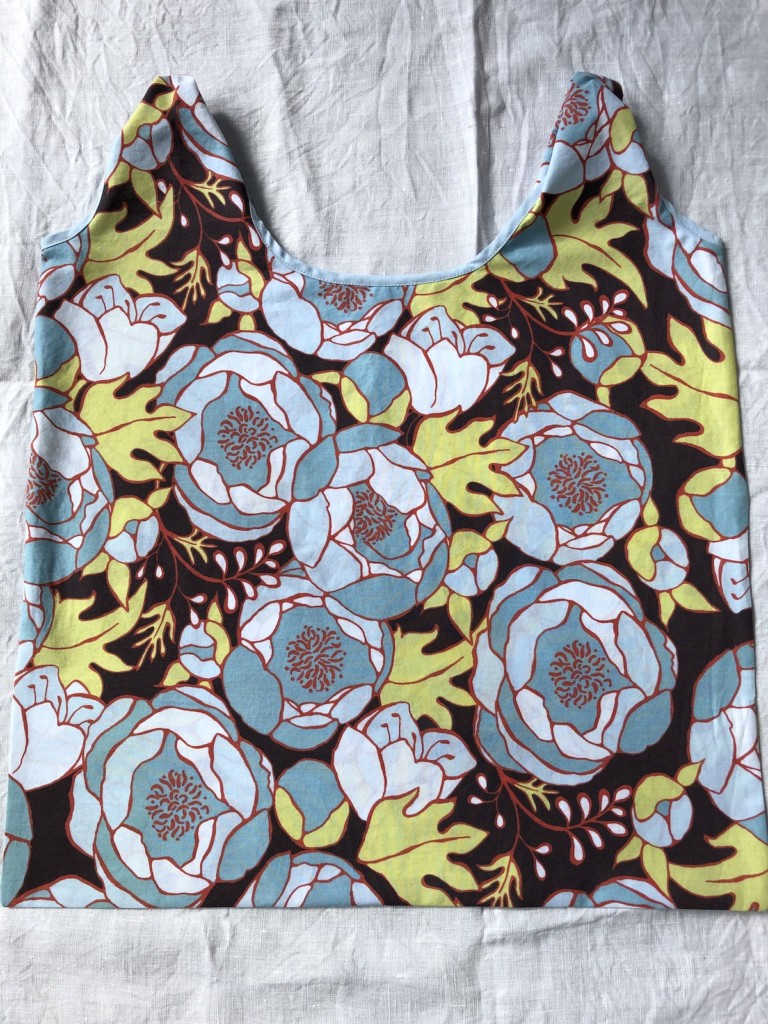 We’ve got a number of terrific new (to us) products from Alchemy Pickle Company on the site! Here’s some insider advice about how to use Roasted Eggplant Garlic Paste and Meyer Lemon Garlic Paste: Rebekah says, “These are both incredibly tasty kitchen shortcuts I can’t do without. Add a spoonful of eggplant paste to pasta, scrambled eggs, on a pizza base, or build a marinade with it. Use the lemon paste to brighten up any dish –soups, potatoes, dips, steamed greens, or salad. Run out of fresh garlic? Don’t have a lemon handy? No worries!”

Buschbeck Farms is back with a selection of lamb, wool socks and sheepskins they can send down with Jens this week. 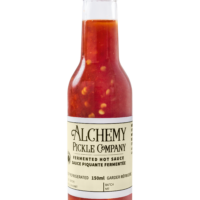 150ml Fermented with sea salt, blended hot peppers and garlic. A great addition to noodles, stir-fry, soup, or anything that could use a spicy tangy kick. Our hot sauce this year is almost entirely made with peppers from Sosnicki Organic Farm. Ingredients: Organic Ontario hot/sweet peppers, Organic Ontario garlic, sea salt. May contain filtered water.

Harley Farms has fresh turkeys to order now for pickup or delivery on April 14th.

We’re helped over 20 families with funds raised for Purim. While the holiday has passed, we have kept the Gifts for Those in Need on our website for this week in case anyone would like to help the remaining families on our waitlist. We could give market gift certificates to everyone remaining on our waitlist if we could raise another few hundred dollars. We have also added a “Top Up” option of a 18 dollar gift to really help market goers come together in support!

For the past few weeks, many market-goers have expressed their grief and dismay at what is taking place in Ukraine. As we know, variations on this tragic theme are happening all over this troubled world. We don’t often talk about such things in the market news, but people have been asking what we should do to help. Our market community is made up of remarkable individuals, and we turned to one who has a special perspective on the situation. Andrea Kuzmich is a musician and ethnomusicologist, and we are grateful to her for contributing the following piece.

“My Ukrainian grandparents immigrated in the 1920s. I don’t have any known family in Ukraine but I have dear friends. And it’s true: the terror – of burned apartment buildings, homes, business; of flattened landmarks; of schools and shelters shelled – is real. Villages and homes of friends and friends’ families have been bombed. One house flattened yesterday, thankfully, just after my friend’s 16 year-old sister was able to finally escape the shelling that surrounded her blacked-out village. And this destruction, this terror, is such a juxtaposition to the incredible growth that has happened in Ukraine since its independence and the downfall of the Soviet Empire 30 years ago.

I am connected to a number of Toronto artists and musicians tied to Ukrainian identity. And I’ve been incredibly humbled by this community, which has reacted and mobilized so quickly to the sudden and unimaginable terror of war that fell on Ukraine at the end of February. These people facilitated transportation and lodging for those seeking refuge; advocated and organized services for unfairly treated visible minorities; compiled reliable media and donor agencies for us in the “west;” compiled form letters to government and corporations – to plead for sanction against Russia, to request services be withdrawn from Russia, or to plead for a no-fly-zone; compiled lists of supplies needed from sources in Ukraine and listed local drop-off points here in Toronto; organized a unique Toronto cross-cultural fundraiser. It was and continues to be an unbelievable whirlwind of chaotic organization, logistics, messaging, google docs and sheets, slack channels. It’s a drive that no doubt parallels the mobilization of Ukrainians to fight in Ukraine.

This drive – the heroic defiance of Ukrainians and the remarkable civil resistance –  has captured the imagination of the world. And it is likely the same drive that propelled the incredible growth Ukraine experienced as a free independent state for the past 30 years. And I don’t just mean economic growth. Or even social growth, which has been far more progressive than in many neighbouring countries. But the cultural growth has flourished in an outstanding way.

I can speak most significantly to the music culture. What was passed down to me by my grandparents was a very muted expression of collective identity. One that most likely resulted from Ukraine being the subject of colonizers for centuries. I only understood this when I started studying the traditional Ukrainian songs from scholars and musicians that began visiting Toronto about a decade ago. To say I was shocked by the scope and the uniqueness of the music is an understatement. It was so varied. At times so beautifully delicate and ornamented; at other times so raw and visceral. But most shocking for me was that I had no idea it existed. I, who not only has Ukrainian heritage but am also an ethnomusicologist specializing in the singing traditions of Georgia (a country so close to Ukraine) and with access to information about so many other singing traditions from neighbouring countries – like Bulgaria, Romania, Lithuania, even Moldova; I had no idea that this was Ukraine. It made me wonder: had Ukraine not been its own independent democracy for the past 30 years, would this music still be hidden, or perhaps even lost?

The fighting in Ukraine today is for this chance to be human and express collective identity in a most profound way. It’s a fight for freedom which we unfortunately take for granted (and which most recently has been perverted in the name of health mandates). It’s the power of this freedom for self and collective expression that wields such mighty strength and endurance against the less willing, arguably, repressed Russian soldiers. Unfortunately, by the looks of it, this won’t be enough to counter Russia’s military might in the sky, which continues to bring unimaginable terror. The Ukrainians will continue the fight there; and we will continue to mobilize here too; and maybe, if we inspire the rest of the world to help, it will be enough to end this war.

If you want to help, there are many ways, including fighting misinformation about this war. Reliable news sources, lists of boycotts, form letters to send, and many other resources can be found at Help Save Ukraine. If you want to make a financial contribution, I recommend supporting smaller agencies on the ground, like Help Us Help. Supplies continue to be needed in Ukraine, and Second Front Ukraine has lots of updated lists and drop off points on their facebook group. Ukraine Take Shelter https://www.ukrainetakeshelter.com/ is a site set up to connect housing for refugees; The group I am involved with is also doing awareness guerilla singing, more of which you can read about here. Please stay informed, share information, and keep a watch for the influx of Ukrainian refugees and what you can do to help when it happens.”

Because there are so many organized channels for aid, we are not conducting a market fundraiser, but we hope Andrea’s words will inspire giving, to one of the groups she mentions, or another organization working where there is war, hunger, or displacement. Some ideas:

Canadian Physicians for Aid and Relief

Thank you for reading our newsletter this week, and peace to you all,