It would be too much of a tease to include all the descriptions of the greens and veggies and wonderful foods that will be coming to market in the weeks ahead, but we are rounding the bend towards the outdoor season now, and it’s gonna be great, folks.

Fish fans have been missing the Akiwenzies. Natasha writes: “Had all these lofty ideas to go back to Dufferin at the start of April. Yeah right. Snow, winds and nets being encased in ice twice has not allowed this to happen. No promises but working towards next Thursday to be back. Winter will have to give it up eventually I think. As I write this I watch snowflakes float past the window.

Now hoping spring-like temperatures for the week’s end will hold true and calm winds join them. (I feel like I am asking a lot.) Hope to see you next Thursday.”

Damon Dewsbury (Culture City) had delicious ‘Vegan Chorizo’ on offer last week, and has promised to bring it again. It’s made from tempeh and a blend of spices with a little heat, and can be substituted for ground beef. At our house we sauteed it and used the spelt wraps Plan B brings to make burritos one night, and made pasta sauce with it for another dinner. Yum!

DeFloured will be absent this week. Welcome back to Southbrook Vineyards! 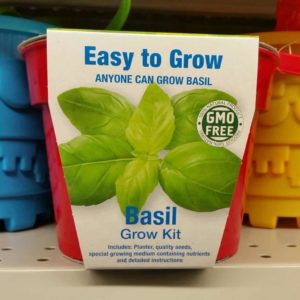 On a stroll through the dollar store, I saw Easy to Grow Basil kits labelled GMO FREE. I guess the labels are meant to be reassuring, but I found their effect quite the opposite.  What is the world coming to when we need such labels on something as simple as pots of herbs? Fortunately, no plants or seeds sold at the market are genetically modified, and our farmers don’t grow GMO crops. It’s not so simple on some other Canadian farms. Have a look at the information reprinted below from the Canadian Biotechnology Action Network (CBAN).

Join us at 4:30 for the grand finale of our Loyal Eaters Reward program. It will be more exciting than the end of Downton Abbey; we’re having a draw to see who wins each of three market bags full of goodies donated by the vendors.

Once again, thanks to all for your commitment to local food producers through the chilly months!

See you at the market!

Here are the vendors we expect this week:

Action Alert:
Farmers and consumers in Canada are facing the new reality of a limited release of GM alfalfa seeds this Spring. In a rushed move, the company Forage Genetics International has sold a limited amount of GM alfalfa seeds in Eastern Canada. This first sale is enough to produce up to 5000 acres of hay.

[Background: Alfalfa is a perennial crop that is pollinated by bees, and it has tiny seeds. This makes contamination a serious concern if GM alfalfa is widely released. These seeds use Monsanto’s GM traits for glyphosate [Roundup] tolerance and low-lignin: the two traits are “stacked” together in the one plant.]

This is the first time that GM alfalfa seeds have ever been sold in Canada and we need your help to stop any future sales. Further sales have the potential to harm the viability of many family farms, if contamination becomes widespread.

Traditionally, alfalfa (in pasture and hay) feeds many farm animals, including dairy cows. It is a fundamental part of producing many of the foods we eat. Many types of farmers, including organic farmers, rely on alfalfa and many farmers in Canada also grow alfalfa seed for domestic and export markets. GM alfalfa contamination on these farms would be a serious threat to many livelihoods and threaten the integrity of our food chain.

Please help CBAN, in collaboration with concerned farmers across Canada, to stop any further release of GM alfalfa.

The market is open from 3 to 7 pm, rain or shine.
There are special parking hours for Thursday afternoons across from the high school at the north end of the park.