We tend to shy away from strong smells, but at this time of year, there is much to celebrate that is on the stinky side.

I love this description of Skunk Cabbage by our friends Liam and Crystal from Wildlife Gardening: “One of the first native flowers to bloom in spring, it can generate its own heat, keeping the plant between 15 and 35 degrees Celsius, allowing it to emerge through frozen ground. This heat helps carry the smell of ‘carrion-scented’ flowers that attract early emerging pollinators. The heat combined with the shape of the spathe also give pollinators (and possibly other animals) a warm spot to hang out or sleep during cold nights….Roots are contractile, pulling the plant deeper into the swampy soil each year.” What a plant!

Swampy muck is what happens when composting doesn’t go well, but smelly turns beautiful when I save my best market produce scraps for ‘the buddies’ in my worm bin and get the right balance. After a long winter, I’m digging out the results to renew tired pots of soil in for spring planting.

Meanwhile, Ben Sosnicki (who may be back at market as soon as next week!) has been spreading manure on the fields from a neighbour’s organic dairy herd in preparation for a great growing season. It’s precious stuff: finding a reliable and affordable supply of organic fertilizer can be a serious obstacle to organic certification unless animals are part of the farm. Head up to Marvellous Edibles if you want to see a system where very few off-farm inputs are needed.

Of course, some of the greatest foods are smelly ones. Treat your nose to the many varieties of cheese and mushrooms at the market this week! And in late-breaking news, Pine River will bring the first wild leeks! My Dad and his best friend Jack used to celebrate spring by feasting on the first leek leaves until they smelled too bad to be allowed in the house. Who wants to be indoors, anyway? It’s spring!

Linda and Angelos from Country Meadows will bring in more of the potted herb plants they grow so well. There will be plenty of seeds from Urban Harvest, and I’m hoping Colette will send along some of the dahlia bulbs she was telling me about last week. They are from a supply of several varieties she purchased to grow out and propagate, so this year’s bulbs aren’t organic yet, but they will be gorgeous.

A note from Jenny at Knuckle Down Farm: “The last few cold nights have slowed things down a bit so I think I’d be best to wait another week before harvesting again. The onions will wait and the giant spinach needs to make way for the baby spinach underneath it! We will definitely come back next week.”

Bees Universe will be absent, trying to catch up with work on their hives, and Plan B will be back next week. 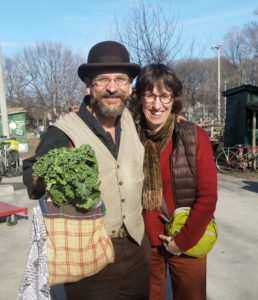 The Loyal Eaters Awards Ceremony we imagined for last week didn’t start off with much of a bang. There were small bangs on a small pot, but in the hubbub of the market, we couldn’t find any of the winners. Three bags stuffed with generous contributions from the vendors, and nobody to give them to. It’s a good thing the TV crews weren’t broadcasting live.

However, through the miracle of the telephone, we tracked down perfect attendee Alec Bosse, who had already finished his shopping and gone home, but turned right around and came back, and Alissa Hamilton, who was just on the way. Look at these happy people! 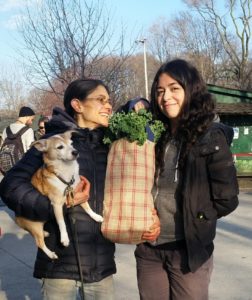 The third winner was (2017 K.M. Hunter Artist Award recipient) Marianne Apostolides, who explained that her latest book (Deep Saltwater) was launching at 7 pm, and she didn’t think she could make it to the market. I decided this might qualify as an acceptable excuse, and offered to drop off her prize. Guess I should have called the camera crew then; Marianne appeared at the door looking ready for the red carpet, and her excitement about winning a bag of market goodies was better than anything I’ve seen on TV.