If we tried to provide a full list of the foods coming to market, we’d almost certainly miss a few. Every year, our growers try planting varieties of produce that they’ve never grown before, adding new flavours, and learning about variations in drought or blight-resistance, beauty, yield, and popularity. Small-scale farms such as those that come to Dufferin actually tend to grow more varieties of produce than jumbo ones. While government supports such as crop insurance typically favour ‘Big Ag’, small organic farms rely on diversity to increase the odds of success. They’re more nimble, very interested in direct communication with eaters, more willing to try varied growing techniques, and in our local organic community, there’s amazing farmer-to-farmer education going on. When you load up your basket of luscious veggies, you’re also investing in a local knowledge bank!

The Ministry of Agriculture is currently working on a campaign called “Bring Home the World”, to increase local production of fruits, vegetables, meats and other food products valued in cuisines and cultures around the world. It’s great to see Anan Lololi, Bashir Munye, and others connected to local farmers’ markets in the upbeat youtube video about the initiative. They’re asking for input from consumers, and farmers like ours could do wonderful things with appropriate support.  As an example, last year Everdale took the lead on growing ginger and turmeric, and of course, it was gobbled up with great enthusiasm. How about sending some ideas to the government? One way is to complete the Bring Home the World online survey: www.surveymonkey.com/r/worldfoods

Returning to that list of foods, some of the produce highlights will be freshly harvested garlic, sweet yellow cherry tomatoes, supremely good peaches, basil to buzz with oil and freeze for that other time of year, new potatoes, and enough greens to make you glow in the dark.

From Knuckle Down Farm: “Lovers of Spicy Salad Mix rejoice, we have a beautiful harvest for you this week! There are so many beautiful vegetables coming out of the garden right now it is hard to know what to mention. Giant beet bunches, colourful beans, crunchy carrots, beautiful rainbow chard. There is something for everyone this week. My friend Lauren will be helping my out at the table and she has never been to the Dufferin Market, so do come over and say hello.” Jenny

Spade and Spoon will be absent because Blythe and Adam have a bumper crop of cucumbers, and they are pickling into the wee hours. Cucumber patches are susceptible to mildew, so it’s a race against the clock when you want to harvest as many cukes as possible and you don’t rely on chemical fungicides. Go team!

We’ll also be missing Waymac. Erika wrote to say that mushroom production is down as Andrew has been working so hard haying, which is his other main crop.

Please note that the quantity and variety of park breads will be lower than usual this week, and there will be no park bread next week. Unfortunately, there is a shortage of skilled bakers through this stretch. 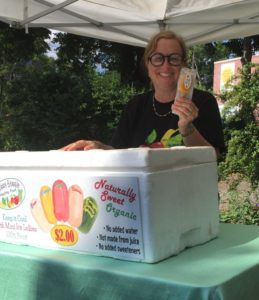 Nikki from Boomerang Bags will also be back doing show-and-tell to raise awareness about kicking the plastic habit and diverting textiles from landfill.

There will be plenty of ways to keep cool. Options include ChocoSol’s frothy Mexican chocolate drinks, sheep’s milk ice cream from All Sorts Acre, Fressy Bessie’s ice lollies (including the new summer peach flavour), and  Earth & City’s smoothies and lemonades, and the park is an inviting oasis.

P.S. Thanks to the wonderful one and only Cookie Roscoe for the panoramic shot of last week’s market.