We had such a fun start to the rink-market season last week! We had to reassure a few dismayed people arriving on the west side that the market had not been abducted by aliens, but once they made it around the corner, they cheered up immensely. There are still some summery-tasting foods around, but hearty fall flavours are coming on strong now, and as you’ll see below, the farmers are bringing major quantities of the crops that will keep us well-fed in the months ahead in from the fields.

And here is a picture of our triumphant squash harvesters…5000 lbs of butternuts ALONE were yielded this year! Squash season is here, baby.” Wolf Chrapko 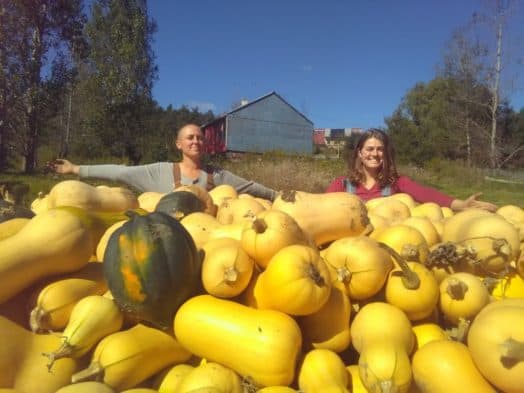 The Sosnicki Organic Produce contribution: “Hey all! Come say ‘Hi’ to Ben who is back at market! He’ll have a pretty wicked potato display as I’m sending our blues and fingerlings along with the Yukons! More fresh cut Broccoli, Cauliflower, Celery, Carrots, Beets, Kale, gorgeous red and green Cabbages, Onions and Garlic AND more Red Peppers!! Happy fall eating everyone!” Jess, Ben & crew

Pine River will be absent this week. 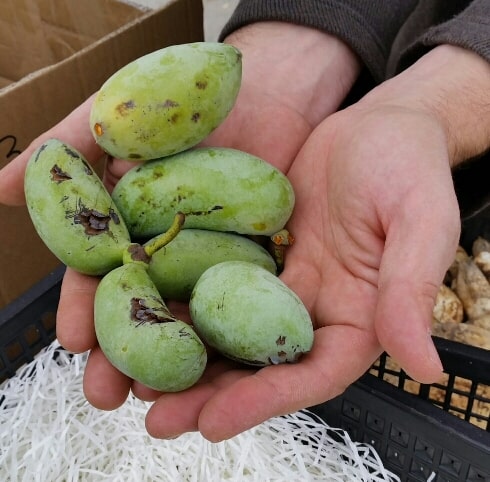 Exciting news from Forbes Wild Foods: “We will have lots of pawpaws but this may be the only week that they are available as they are all coming in at the same time. We will also have fresh chanterelles, heart nuts and maybe some hazel nuts.” If you’ve never tried a pawpaw, you should! Among foods that grow locally, they have the most tropical flavour – although Everdale’s local ginger is a new rival! They taste a little like pineapple custard when ripe. You can save the seeds and grow your own pawpaw trees, too!

Throughout October, Ted Thorpe is going to bring jack-o-lantern pumpkins (not certified organic, but unsprayed, from his neighbour down the road). We’ll set up a carving station, and count votes to see whose pumpkin wins each time. Show off your talents, and you might be rewarded with a market buck voucher! Note that kids will need to have an attentive adult nearby.

We’re hoping for a visit from Boomerang Bags, probably the last one for 2017. Ask Nikki about how she spends the other half of her year, and you’ll be inspired to reduce use of plastic.

Some ‘offsite’ items of interest:

Let’s help our friends at FoodShare! They are trying to secure funding so they don’t lose their biggest School Grown garden. You can cast votes in support of their project (and other interesting initiatives) at FoodShare.net. Projects that get the most votes will receive grants from the Aviva Fund.

#seedspotting
USC Canada works directly with farmers in Canada and around the world to help them save seed and support agricultural biodiversity. For the month of October they are running an online Seed Spotting
Scavenger Hunt. Participants are encouraged to identify and match the picture of a seed to the food it grows, snap a picture and post online. All successful posts will be entered into a draw to win a prize! Visit usccanada.org to give it a try. HINT: all the seeds shown can be found at the market!

Planet in Focus Environmental Film Festival is coming up October 19-22, with lots of interesting screenings and talks!

See you on the rink!
Anne Freeman